Part I: The Discovery

In my previous blog post, I shared photos of six unique Color Computers; four of them are CoCo 3s from Microware Systems Corporation of Des Moines, Iowa (Microware has changed hands a couple of times since that time). In this post, I'll give some background on my Microware experience and how these CoCos came to my attention.

I joined Microware in the summer of 1992 as a software engineer. Getting my foot in the door had everything to do with my ownership of a CoCo and familiarity with OS-9, so everyone at the company knew of my Color Computer interests. I worked directly with Mark Hawkins and Todd Earles, two of the "CoCo 3 mugateers" that you see when you hit CTRL-ALT and the reset button on the CoCo 3. I was told first-hand of the lore and war stories behind the development of the Color Computer 3's BASIC and the ports of OS-9 to the Color Computer family. But I never actually saw any evidence of the development of the product. That is, until late one night...

The Microware building on 1900 NW 114th Street was arranged in somewhat of an L-shaped fashion with much of the work areas filled with cubicles. I worked on the side of the building that would be considered the bottom of the L. Near my workspace were other cubicles of other employees, as well as a few empty ones where miscellaneous equipment would tend to accumulate.

I was working late one evening when I walked by a cubicle next to the "machine room" (a large air-conditioned enclosed area where Unix servers and OS-9 VME crates used for development were housed). This particular cubicle had been empty earlier in the week, but now housed a bunch of boxes of recently moved equipment. Curious, I stepped in and poked around, whereupon I discovered several Color Computer 3s. In another box were a few more Color Computer 3 cases and some documents scattered about, including the specs for the CoCo 3 on a Tandy letterhead. Still in another box were loads and loads of game and application software cartridges from Tandy. Another box held a DS-69B digitizer and some unrecognizable cartridges. There was even a huge GIMIX 6809 computer named "Sybil" which I later discovered held all the OS-9/6809 sources (even the source to the fabled Level 2 Upgrade), but that's another blog post...

Back to the find... I was ecstatic to see all of this CoCo equipment in one place, and it began to dawn on me that this was Microware's stash of Color Computer goodies they used for development some 10-odd years earlier.

The next day at work, I shared the discovery with another CoCo aficionado and Microware employee, Scott McGee. Scott had started working for Microware about a month before I did and also got his foot in the door through his Color Computer experience. He was keen on viewing the CoCo stash, so together we went to the cubicle and looked through the boxes to get an idea of what was there.

I brought up the idea of cleaning up all of the CoCo equipment and putting it in an area of the building that would showcase Microware's legacy work, but that didn't go anywhere. My impression was that no one at Microware really cared to pay homage to the work that was done on the Color Computer. No matter how I viewed these machines and their legacy, for the rest of the company, there was no interest in celebrating the past.

Everything CoCo related in that cubicle stayed in place for a while, and then it happened...

One of the things on my to-do list has been to showcase some very specific Color Computer history. Those who have read the book "CoCo: The Colorful History of Tandy's Underdog Computer" will recognize the machines in the next photo: 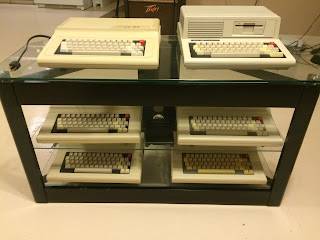 The following two photos give another view (apologies for the poor lighting conditions). 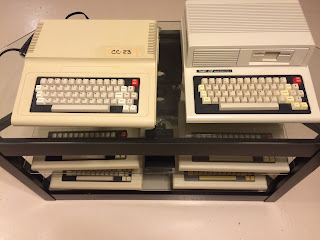 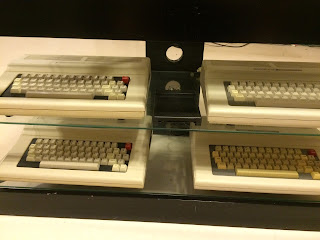 The black cartridge in between the two CoCo 3s in this last photo is an interesting artifact that I'll devote a whole blog post to later.

If these four machines could speak, they would tell some interesting stories. While I wasn't at Microware at the time the CoCo 3 was being developed, I came on board later. Now I think it's time to tell the tale about how these CoCos were discovered and where they have been since that time. Stay tuned for the "rest of the story" in a subsequent blog post.

For now, enjoy the photos!

Now that we've explored the case, it's time to delve into the innards.

Below is a hi-res picture of the motherboard of the Deluxe Color Computer. You'll immediately notice that it has lots of wires -- undoubtedly modifications to adjust its operation after the board run in order to fix issues. 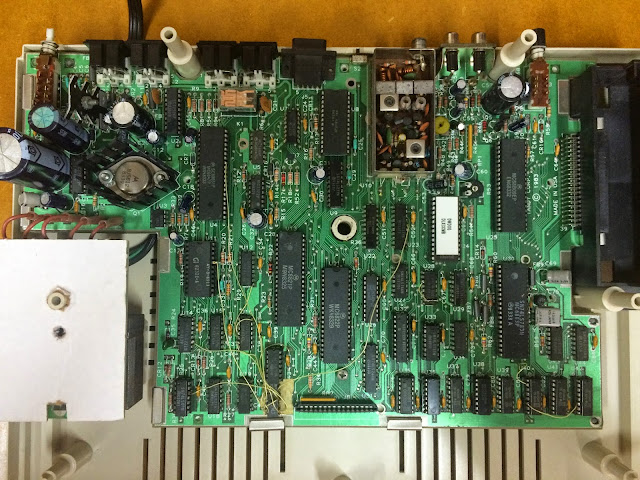 Since there isn't a service manual in existence for this machine, any attempt to understand its design must start with a survey of the integrated circuits that it contains. I'll enumerate them here:

There is an additional IC near U20 that is glued upside down on the board with wires coming from it. I have not identified that IC up to now.

The power supply is located on the middle left side of the case,  just as it is on the 64K Color Computer. The keyboard connector accepts the ribbon style mylar cable that is common on the CoCo 2 and CoCo 3. And of course, the 40 pin expansion connector is right where it should be.

Recall from the previous post that a 9 pin serial connector is mounted on the back, as is composite audio and video.

There's quite a bit to digest here, and I'll be out of town a few days on business, so there will be a stretch of time before I can make another post. So have fun and let the comments ensue!

It's time for a little "computer archaeology."

Other than pictures in "CoCo: The Colorful History of Tandy's Underdog Computer" and a showing at the VCF East 9.1 (April 4-6, 2014 in Wall, New Jersey) and the 23rd Annual "Last" Chicago CoCoFEST (April 24-25, 2014 in Lombard, Illinois), the Deluxe Color Computer has not been seen in the wild. There are two that I know of in existence, and both are in my possession. One is in better shape than the other, and that's the one I brought to the above events.

Chatter on Facebook about a "better CoCo 2" brought me to the idea of finally taking this beauty out of the cabinet she lives in and show her to the world. There is no technical or service manual available anywhere that I know of. The web is rife with speculation about what's in it, so I figured it's time to delve into the details. Who knows where this will lead...

For this post, I'll show pictures of the case.

The label "CC-23" taped to the top is of unknown significance, but I speculate that it has something to do with where it came from. The provenance of this computer is revealed in the above mentioned book, so I won't give it away here.

The layout of the keys indicate the keyboard to be just like a CoCo 3, but with a black bezel instead of the familiar grey on the CoCo 3. Radio Shack sold keyboards like this in baggies for a time, and it's widely speculated that those keyboards were salvaged from the scrapped Deluxe Color Computers in order to get some value out of the aborted computer. I tend to concur with this explanation. 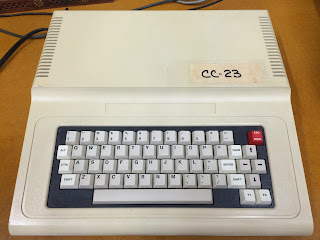 There's always something interesting to glean when you see handwritten markings. Underneath the top case and written in red permanent marker are two pieces of information: 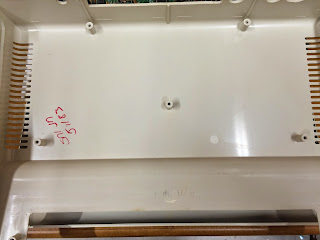 The dashes between the dates are actually dots, but it's clear this was marked on April 11, 1983.

The bottom is nothing spectacular. No serial number sticker, no manufacturing code or location, nothing... The only thing there are the common rubber feet. Again, the screw holes and vent holes match that of the bottom of a 64K Color Computer case. 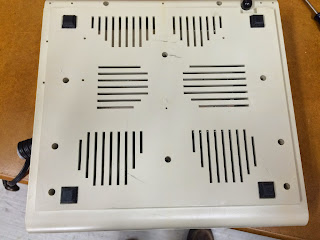 Turning over the bottom and looking at the inside of the bottom case reveals another set of markings:
NB3
5/2/83
KJW 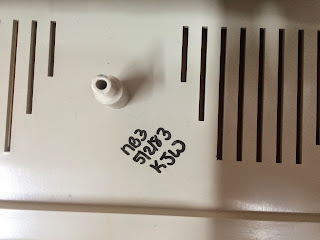 This date is 9 days earlier than the one written on the inside top of the case. Again, the significance isn't clear, but KJW appears to be someone's initials. This more than likely is documentation of some type of quality assurance check -- a "stamp of approval" if you will.

The back of the Deluxe Color Computer clearly indicates new hardware features. Again, it's clear that the case itself derives from the 64K Color Computer, and I've stacked one on top in this photo to illustrate this: 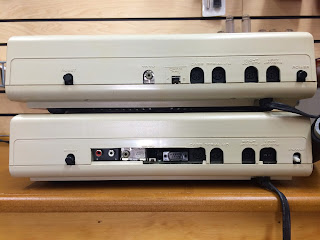 It's obvious that the back-top of the Deluxe Color Computer case had to be cut to accommodate the new connectors. In addition to the omnipresent RF modulator, there's composite audio/video and a 9 pin port. Cassette, serial, and joystick ports are where they normally are, as well as power and reset (the power button is missing its black cap on the Deluxe Color Computer).

If you've read the book written by Bill Loguidice and me, you already know a little about the Deluxe Color Computer. Tandy engineers designed, developed, and even began manufacturing this unique addition to the CoCo family, but it would never see the light of day. Due to the unavailability of certain chips (the VDG being the prime candidate), it was canned, and all product were destroyed. Instead, we got the 64K Color Computer and the Color Computer 2 in the fall of 1983...

But there were survivors.

Over the next series of blog posts, I will dissect this very unique computer. Who knows what might come of this... a new board for the CoCo 1 or 2 which finally brings the functionality of the Deluxe Color Computer to the masses? An extension to existing emulators like MESS which can properly emulate the machine?